The DISPERSE software was first launched by the NDE Lab in 1990, but as the latest news proves, it is showing no signs of slowing down. On the contrary, 25 years on from its’ launch, a new upgrade is just about to be launched.

Since the Non Destructive Evaluation (NDE) Lab was established in the 1980’s in the Department of Mechanical Engineering, extensive research has been conducted on a wide range of NDE topics, which has included the use of guided waves for the rapid inspection of structures such as pipelines. This specialist knowledge led to the development of the now widely-known DISPERSE software. The NDE Lab’s continuous research developments since then has meant that the software is constantly being upgraded; ensuring its leading position as the top software tool for the study of guided waves from the start and until today, 25 years on from its’ launch.

Since its launch, the software has seen several upgrades following developments made in the NDE Lab, which has meant that the software, available for research and commercial use from the start, has constantly been a state-of-the art, and go-to product, for the modelling of sound waves to calculate dispersion curves for multi-layered structures. DISPERSE is now established internationally which is validated by its wide use and the numerous comparisons of its calculations with published material and experiments.

Use by its 200 clients in 25 countries has supported the commercial development of new guided wave methods for NDE, including the Guided Wave Testing (GWT) of pipelines which is used by the oil industry, and established in national standards, to maintain the integrity of vast lengths of pipelines around the world. An important feature of the package which is highly valued by its users is its extensive user manual; this has more than 200 pages covering the scientific theory and example results as well as detailed instructions for use of every feature, and a quick-start tutorial.

The software upgrade about to launch includes product features to make the software even more user friendly than before, enabling robust automatic solution of even the most complex problems without the need for user input, thus enabling much less specialist skill in order to use it. The new upgrade will also include the possibility to model materials of much greater complexity, including almost all classes of anisotropy.

We got in touch with Professor Mike Lowe to congratulate him on the news:

Congratulations on the 25th anniversary and continued success of DISPERSE, with a new upgrade that is just about to be launched. DISPERSE has come a long way, but has always been at the forefront of sound waves modelling to calculate dispersion curves for multi-layered structures.

Q: Could you please tell us about the key research findings/developments that has helped secure its place at the forefront over the years?

We have refined DISPERSE since it was first launched in 1990, involving an enormous development effort. Early developments addressed the robust solution of the underlying equations, enabling users to solve guided waves calculations robustly for a wide and general range of problems, for the first time.  Developments have continued since, expanding the range of structures and waves that can be studied, and also adding more useful processing and display tools. This has been directed to a large extent by feedback from users and our assessment of the directions of interest in guided waves research, in which we continue to be deeply engaged. For example, recent research in our group has delivered a powerful new algorithm for automated robust solutions which is now being coded into Disperse and will be provided to users in its next release.
Professor Mike Lowe
Professor, NDE Lab, Department of Mechanical Engineering

Q: How has the income from DISPERSE been used to support the research of the department?

We have used income from DISPERSE over the years to pay for programming support to maintain and develop DISPERSE. Also, recently, we used this income to pay for a PhD student who did his research on improved methods for solving the dispersion equations; this has produced new capabilities that we will provide to users in the next release.

We wish Professor Mike Lowe and his team in the NDE Lab continued success in the future!

Please click here for a full-length Case Study on DISPERSE.

For more information about DISPERSE, please visit this link:
www.imperial.ac.uk/non-destructive-evaluation/products-and-services/disperse/

To download a free trial version of DISPERSE, please visit this link: www.disperse.software Monday March 8th celebrates the social, economic, cultural and political achievements of women, globally and this year's theme reminds us to challenge and call out gender bias and inequality. We've asked some Imperial role models how they #ChoosetoChallenge. END_OF_DOCUMENT_TOKEN_TO_BE_REPLACED 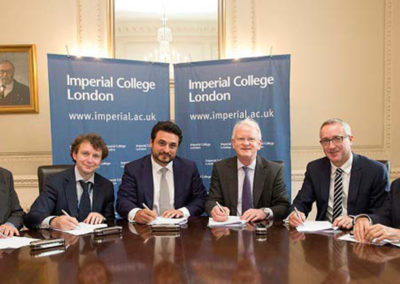 Commissioned by Drax and delivered by Dr iain Staffell and team, the quarterly Electric Insights reports analyse raw data made publicly available by National Grid and Elexon, which run the electricity and balancing market respectively, and Sheffield Solar. END_OF_DOCUMENT_TOKEN_TO_BE_REPLACED