Our consultants shared their expertise in hydrological modelling expertise to help PyTerra to demonstrate the potential of the new system of smart technology to reduce downstream flooding.

PyTerra has developed a new river control system that reduces downstream flooding by using a network of smart sensor controls that drive hydraulic gates and valves in response to predicted rainfall data.

PyTerra’s system captures excess surface water from upstream areas and diverts it to floodplains and retention areas as necessary throughout the annual water cycle. This addresses both flood and drought issues as the water can be released when needed, for use by a wide range of local stakeholders such as water companies, and they wanted to use hydrological modelling expertise to investigate the full potential of this new system.

They engaged Dr Wouter Buytaert to work in conjunction with professional services firm WSP, for the task.

The team, led by Dr Buytaert, used an existing UK hydrological model to look at the impact that a number of flood storage areas and flow control devices had on a known area of flooding.

Actively managing the system through intelligent and sensor-driven controls means that the network has the potential to optimise the portfolio of ecosystem services provided by the terrestrial water cycle.

With this type of optimised approach, stakeholders such as flood authorities, water companies, infrastructure projects (e.g. HS2) and land developers can all set water service targets if they are willing to pay land owners for the benefits the system can deliver. However, such a ‘market’ can only exist where there is a system in place to consistently estimate, deliver and measure the services. Dr Buytaert’s report shows that the proposed system achieves these things, making it an exciting time going forward for us at PyTerra.

The development of this new system is particularly welcome, given the UK flooding resulting from severe storms in recent years. This approach to freshwater management has not been attempted at this scale before.

Dr Buytaert’s expertise has allowed us to assess and validate the level of benefit that our system can deliver. His report will help to support our grant applications for further research and could play a part in influencing the water industry to take a more holistic approach towards developing freshwater solutions at a catchment level.

Additionally, socio-economic pressures are increasing the need for all sectors to deliver water services, for example supply diversification and biodiversity enhancement. This is encouraging both government and industry to move away from a ‘silo’ approach, towards cross-sector solutions where the true value of water can be recognised. Our consultants shared their expertise in acute medicine and experience of working for governmental organisations and the NHS to help NHS Scotland and the Scottish Government to improve efficiency and quality in the Scottish health service. END_OF_DOCUMENT_TOKEN_TO_BE_REPLACED 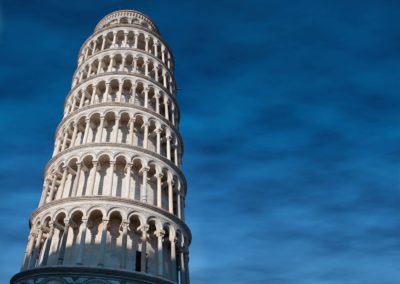 Stabilising the Leaning Tower of Pisa

Professor Burland, a soil mechanics engineer, selected by the Italian Government to help re-position and stabilise the Leaning Tower of Pisa as part of a 14 strong rescue committee. END_OF_DOCUMENT_TOKEN_TO_BE_REPLACED